Hopefully, when you were a kid you had a chance to play Freeze Tag on the playground. That’s where someone is “it” and when they touch or “tag” someone, that person has to stay frozen. If a friend comes up and taps them then they are unfrozen. It usually ends up with a mass of frozen people in weird poses and is a lot of fun.

Freeze Tag on the computer, on the other hand, started as a modification to the game Quake 2, which I wrote in 1997 (under the handle Doolittle). The idea was simple, take a team deathmatch game, and when you kill someone on the other side, they don’t die, they freeze in place. If you can freeze the entire enemy team then your team scores a point and everyone is unfrozen. If you run up to a frozen teammate and stand by them for three seconds then they unfreeze and can rejoin the fight. A lot of fun situations can happen with this very simple concept. You can hide out and shoot someone as they try to unfreeze someone. You can get a bunch of enemy guys to follow you, ditch them and return to your frozen teammates to save them. You could be the last one left alive, desperately trying to unfreeze a teammate. 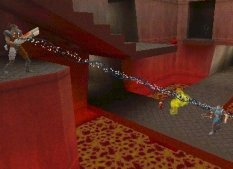 The concept of Freeze Tag for Quake 2 came about as I was playing a popular modification called Jailbreak. In this game mode, when you kill the enemy team, they would respawn back in your base’s jail. If you went to the enemy team’s base and found their jail, you could press a button to release your teammates. It was very fun, but I spent a lot of time just sitting in jail wondering what was happening. The thought occurred to me, what if when you died you just stayed in the middle of the battlefield so you could watch the others? Another factor was that Jailbreak required custom maps to work. You had to have a map with two bases and jails. I didn’t have this type of skill set. I wanted to program a modification, but I wanted it to be very minimal as far as artistic output was concerned. If I did implement the Freeze Tag idea, it would work on any map.

The cool part of the story, for me anyways, was this: it was right at a time in my life where I was picking a career. I really enjoyed computers and thought basic programming was neat, but I hadn’t done any project outside of a school homework assignment. The Quake 1 source code had been released as a programming language called QuakeC. For some reason I had skipped tinkering with this. When Quake 2 came out, and I heard the source code was written in plain ANSI C, I decided to check it out. I had done Turbo Pascal, but this was my first time seeing C. Another thing that scared me was the source was made up of more than eighty files. I had thought it would be one file!

So when the concept of Freeze Tag hit me, and I thought about making it into a mod, it was a very difficult two weeks until I had an actual prototype working. During that time I was very much tempted to give up and go tell someone else, “hey I have a cool idea, do you think you can execute it?” But I pushed through, and got something going, and I released it and people started playing it. It was really fun logging on to a game server and seeing people come on for the first time and ask in chat “what on earth is this?” I’ll never forget seeing one person say, “This is stupid. This won’t last three days!” Slowly people got into it and then they started telling their friends and I got lots of feedback. This really encouraged me to keep working on Freeze Tag. I ended up adding a lot of features because of this feedback loop.

One of the things added was a grappling hook, by Perecli Manole, which acted like real physics. Gravity would pull you down as you swung. I made it so that if you died while grappling then you might have a chance of just hanging there frozen. I didn’t tell anyone I had done this, and when I released the new version I made sure to be there when people were playing. Suddenly someone said on chat something like, “Ahhh! There’s some dude frozen here swinging back and forth from the ceiling”. I also made it so you could grapple the frozen bodies and drag them to some dark corner so people couldn’t find their teammates and release them.

Another cool thing I added was if you pressed a button while you were frozen your game character would say “helppppp meeee” or “it huuuurts” in a crackly voice. This was actually taken from the Quake 2 sounds. If you were frozen, I also gave you an option to see the view from other frozen people, but if someone shot your frozen body, your screen would zip back into your body. This gave your captors a chance to taunt you. Adding little touches like this was fun. For the Quake 3 version, I was contacted by a professional voice over guy, Jeff Wros. He said he wanted to help me record other cries for help. I was completely blown away by this. 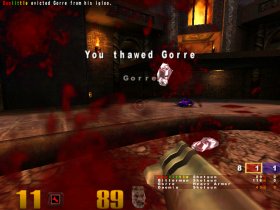 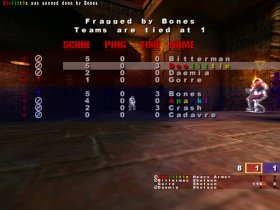 The Quake 3 version was also fun in that the game already had bots. It took a while but I was able to figure out how to get the bots to run over and help people thaw. The bot code had a section where if the bot saw someone holding a flag in Capture the Flag, they would go stand near them and guard. I simply made the bots think frozen people had the flag, and had them stand close by when guarding. This gave the cool illusion that they were trying to rescue you. 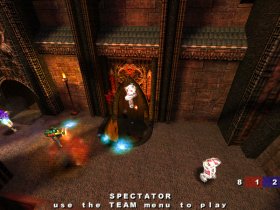 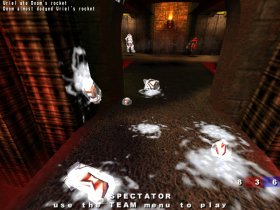 id Software, the people I idolized and who wrote the Quake games, finally sort of acknowledged my modification when they added a game mode to QuakeLive: Freeze Tag! And soon the game Doom will be out with Freeze Tag as well.

Because of the Freeze Tag mod, I realized I loved programming and it was something I could do as a career. It gave me confidence. I really thank the Lord for this incredible turn of events: that I was able to figure out the source code, that this happened right as I was choosing a career, that people came around to support me.

Way back machine: Planet Quake talking about Freeze, being top 10 mod of 1998, shout out to Clan SZT and LKFF, and a Blue’s News announcement